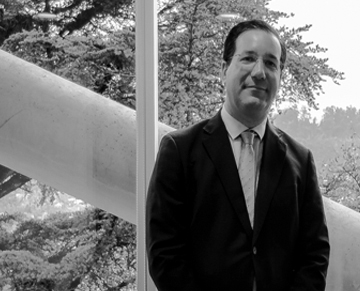 Alfredo Nebreda has vast experience on the areas of corporate, commercial, civil, labor and administrative law.

He has extensive experience in project development in the areas of natural resources (mining, agriculture, fishing, energy, etc) as well as in the area of infrastructure projects (ports, highways, etc). His expertise covers a broad range of issues such as all the corporate, finance and regulatory compliance matters.

In addition, he has been an active advisor in legislative matters, at the national congress as well as at the provincial level.

Attorney and Bachelor of Law and Social Sciences at the Pontifical Catholic University of Valparaiso. Criminal representative of Interior Ministry in the province and the Coordinator of Security Public Policies in collaboration with the Carabineros Chilean Police, Chile's Investigations Police and the Public Ministry. Promoter and coordinator, for the fishing and port policy arena. Representative of the Regional Governor of Valparaiso Chile, for networking with the highest authorities of the People's Republic of China and Guangzhou Provinces (Canton), Mudanjiang city and Beijing.